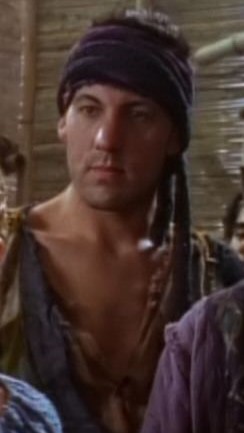 Bio: Perdicas had been the late husband to the legendary bard Gabrielle. Back in their hometown of Potidea, Gabrielle's parents had chosen him to marry their daughter, but Gabrielle had found him boring. Also, she'd decided she wasn't cut out for simply village life, and had left to travel the world with Xena the Warrior Princess. Months later, though, they'd run into one another in the city of Troy, where he'd been stationed as a soldier while Gabrielle had accompanied Xena there to help put an end to the Trojan War. After Xena had accomplished her goal, Perdicas and Gabrielle had parted ways. About a year later, Perdicas had sought out Gabrielle, revealing he hadn't been able to stop thinking about her since their encounter at Troy. He'd proposed, and quickly realizing he wasn't the same Perdicas she'd left in Potidea, she'd accepted. They'd quickly married, but unfortunately, their wedded bliss wasn't to last. The evil warrior Callisto had escaped from prison, seeking revenge on Xena. To that end, she'd attempted to kill Gabrielle, but when Xena had shown up in time to protect her, Callisto had instead gone for Perdicas, killing him and sending Gabrielle into a murderous rage. In the end, thankfully, Gabrielle hadn't had it in her to kill.